(an ‘architectural’ model of wood construction, partly painted white, based on Samuel Champlain’s original 1608 drawing of his fort at Quebec City)

Champlain’s drawing reflects the paradox of all drawings based on objects in three-dimensional space – the loss of those parts beyond the line of the viewer’s sight, the dark side of the moon. Champlain himself, as a cartographer, grapples with this in his drawing.

The model participates in and demonstrates his problem, maintaining a record of the images represented in Champlain’s drawing as painted white. The properties of line in space, or how the viewing subject experiences themselves spatially, is a consistent point of interest in my work.

Champlain’s drawing is of historical interest as the original record of the founding European settlement in Canada, but it is also of interest for its near-medieval attempt to depict three-dimensional space, hovering between perspectival projection and a cartographic plan. 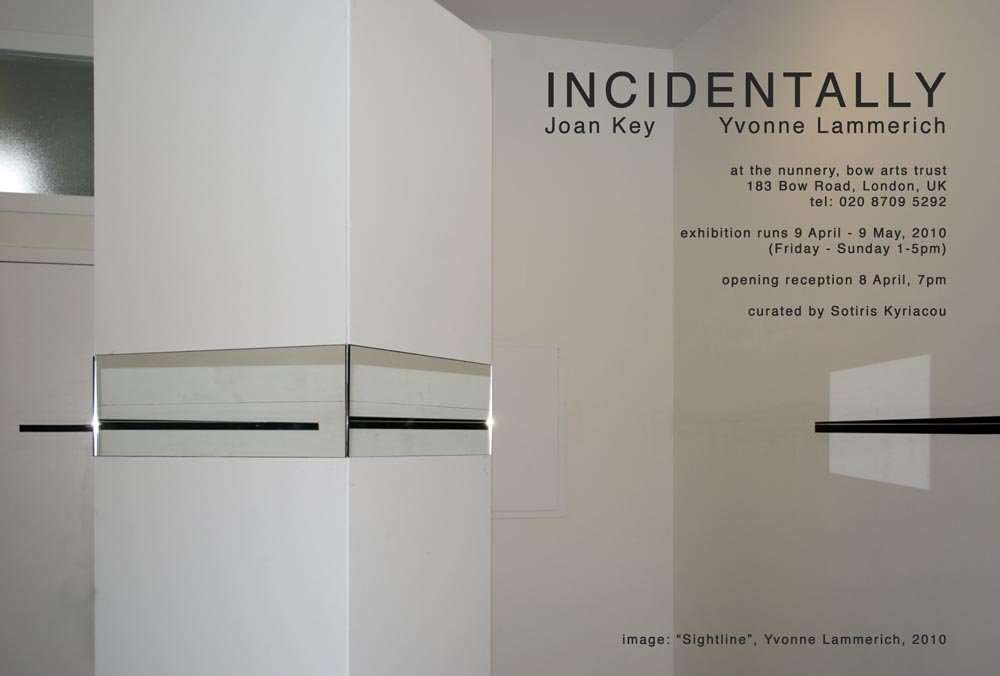 (a series of ‘words’ – a phrase, perhaps – formed of black acrylic paint and set in place on the wall. Accompanying WORDS is WORD PLAY (2010), a video in which the words ‘play’ a musical score on a hand-roll piano. The piano is displayed in a small case.)

In the video, Word Play, the words are played‘ by rolling them back and forth across the surface of an electronic (hand roll Piano). The resulting sounds become a form of speech, where voice, musical notation, and writing coalesce.

(an enlarged plan of the model Abitation in painted wood. Presented as wall-mounted)

Based on the model’s footprint, the plan circulates back to extrapolate Champlain’s original cartographic drawing as an imaginary construction, reinterpreting the architecture of the fort as a set of abstract lines and shapes bearing only an imaginary relationship to whatever the fort’s original plan might have been.

Located in a separate room from the model itself, the plan becomes a memory form, an abstraction in the viewer’s space and time, just as the 1608 fort is an abstraction for us in the twentieth century left with only a fanciful drawing to describe its presence.

Though neither painting is really only black or white, we will hold them in our mind as such, they address both the need and limits of definition. Their scale is related to the artist’s body with extended arms, the circular shape a direct expression of the extension of one arm, armed with a paintbrush and paint – moving across the surface leaving a trace of this motion and the vibration of the living breathing body.

The outside ring is the ultimate extension, whereas the smallest inside ring is the arm’s least extension. The object of this action is to be as mechanical as possible, resulting nevertheless in a trace that records the inevitable fluctuations that deny this breathing, vibrating organism from achieving mechanical perfection. The circular target is not just an arbitrary visual model for a focal point of arrival, but is itself inscribed by the primary actions of the body in its fullest extension on a surface.

(a square column 8’ high and 23 ½” on each side includes an 8” x 23 ½” mirror set at eye level on each of the four sides. This column is positioned obliquely at the centre of three adjoining walls. Painted lines spaced around the perimeter walls of the gallery can be seen to connect when viewed in the mirrors from sites marked around the base of the column)

A series of disjointed lines on the walls, when viewed through the mirrored column, become a continuous play of interconnected lines flowing in and out of each other. Since the lines perceived in the mirror lie behind the viewer, their connection to the lines seen across the space represents a spatial orchestration – or mind construct – the appearance, only, of connection.

These drawings both contain space and pull or push the space of the gallery walls. At once ‘piercing’ and ‘extracting’, they draw space out, constructing ambiguous surfaces interrupting the fiction of the walls’ apparent solidity. 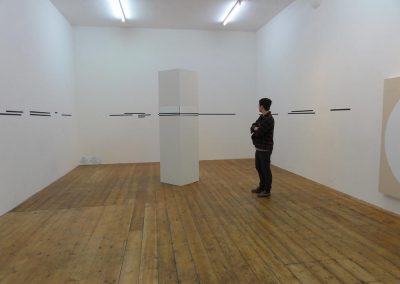 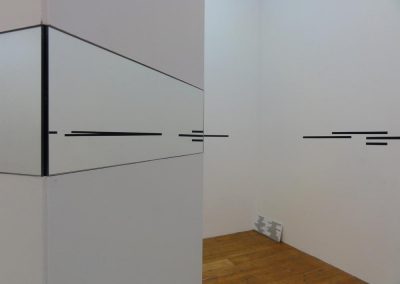 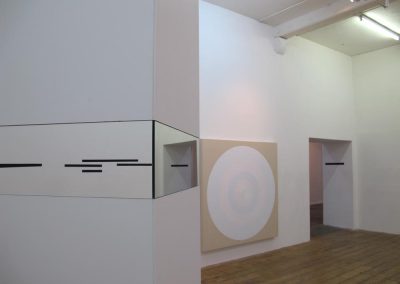 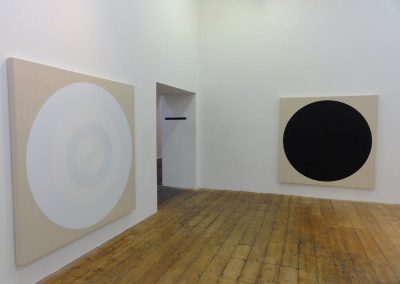 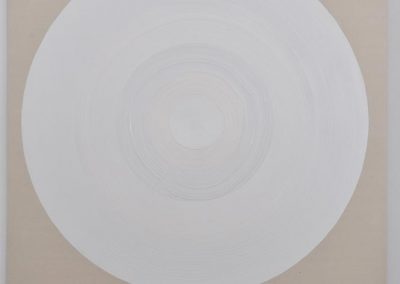 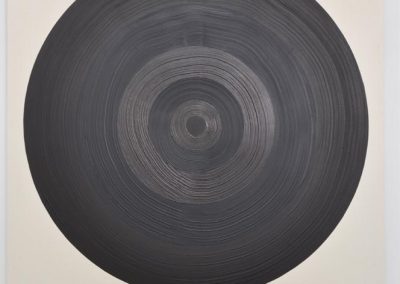 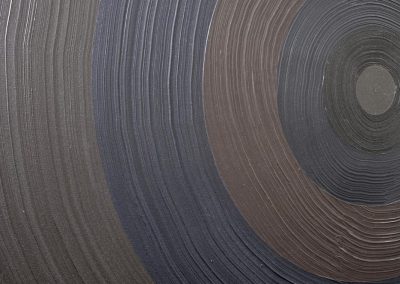 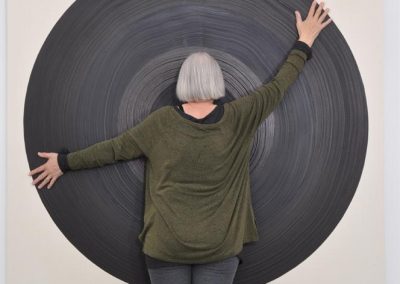 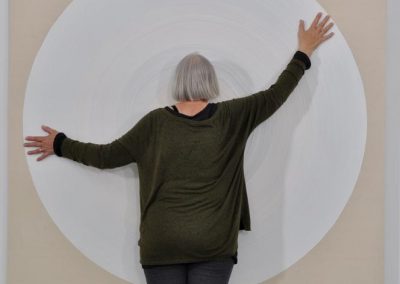 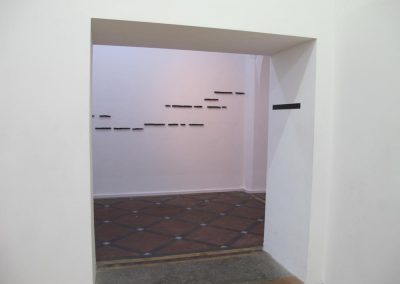 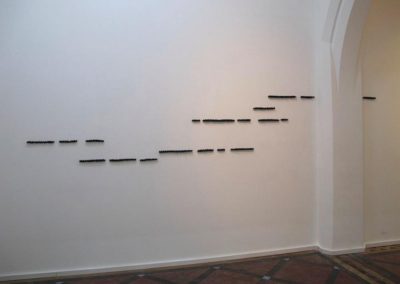 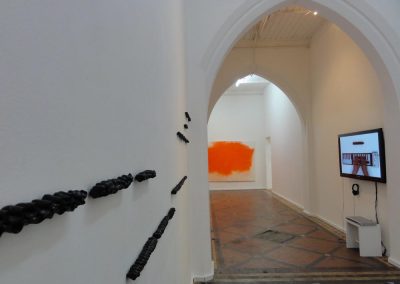 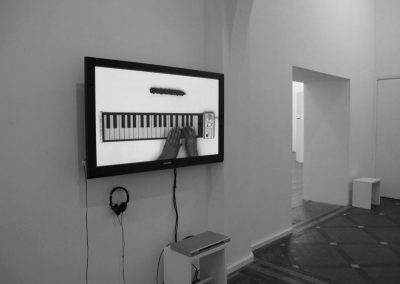 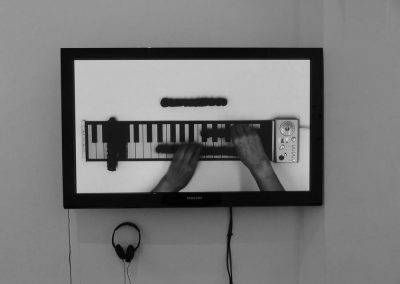 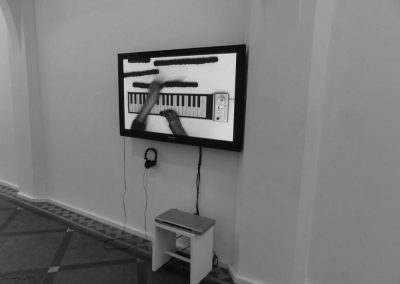 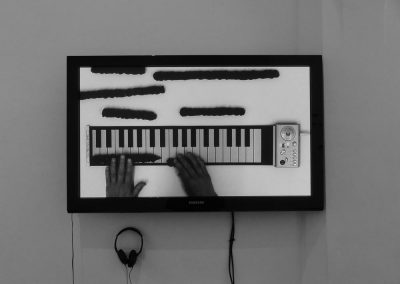 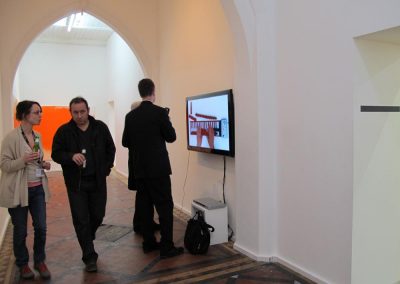 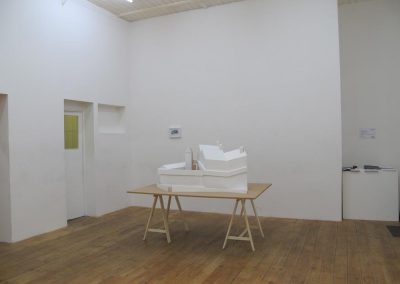 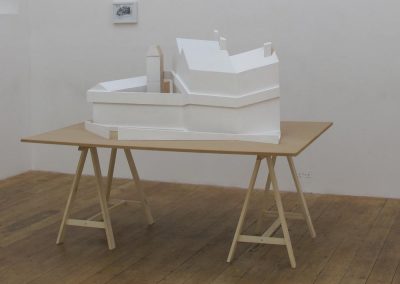 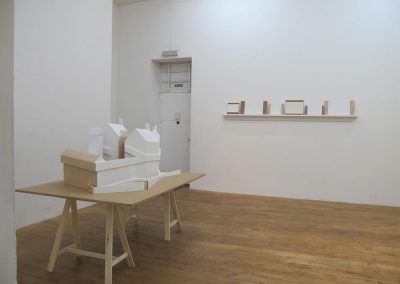 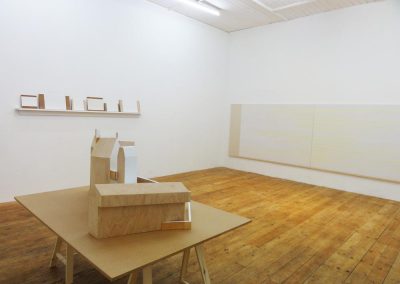