To Make a Story Real

I hid behind a large modern sofa when I was very young to hear the adults talk about space, the universe, time, philosophy and existential questions but in a language whose words and meaning I understood only by the excitement and thrill of their unseen gestures and voices. I came to read the world’s and my identity as echoes formed by different states of space, time and movement resonating as a presence within my body. In this earliest memory lay already the die that forged my curiosity.

How to speak about this experience, when it was not about representation but the apprehension of knowledge through the whole body? It came out as diagrams, propositions, mappings: as paintings to receive the body’s emission, its trajectory of identity cast as a topology of space/time states: an experience of the body identified with the intricacies of language.

I came to recognize states of pictorial language as an active enfolding and unfolding of beliefs: a mythic movement between the edges of lightness and darkness- time and space, materiality and immateriality, presence and absence, an oscillation between becoming and being. Identity as “reality” registered in a sensation of transparency and reflection, absorption and emission.

My work inscribes notations on a net, as on a radar screen, whose multiplicity of potential location, meanings, and associations I have come to speak of as inflections that we inscribe with our beliefs. I can speak of illusion as an essential part of consciousness: in its play it folds image into text, text into image: it situates our body as an opening.

If I have a preoccupation with painting, then, it has been because painting’s pictorial space is a primary site for our projection of the body. I have come to recognize that the vanishing point lies on the interior side of an opening, revealing the infinite potential of the desiring body whose subject is the self.

In my own rereading of the maps and propositions I have plotted with my work, I have come to cast off the shame I inherited, with its redemptive projection of future-progress. My body through the work has overwritten objective difference with subjective “difference:” objectivity is for me now not an opposition but an aspect within which objectivity and subjectivity are interdependent entities.

In the alchemy of my body, as a painter who is a woman. I have come to realize we give birth to space as much as we penetrate or inseminate its ideal. A touching – to make the story real.

Yvonne Lammerich has shown nationally and internationally since 1973. Her work is included in museums as well as corporate and private collections. Born in Germany, her practice has been based in France, Montreal, Toronto, and currently in Prince Edward County, Ontario. 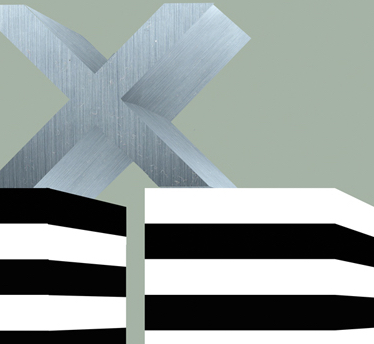